I mentioned in an earlier Instagram post that I would go back to one of the eleven points – that fractal balance had been achieved.

If you’ve followed me for any length of time, you’ve heard me time and again mention that though a price objective had been reached, the time objective was not complete, so price would not move until then.

While there have been many minor balance/symmetry inflection points along the way, here’s a look at the SPX daily chart with the three major balances that most caught my attention: 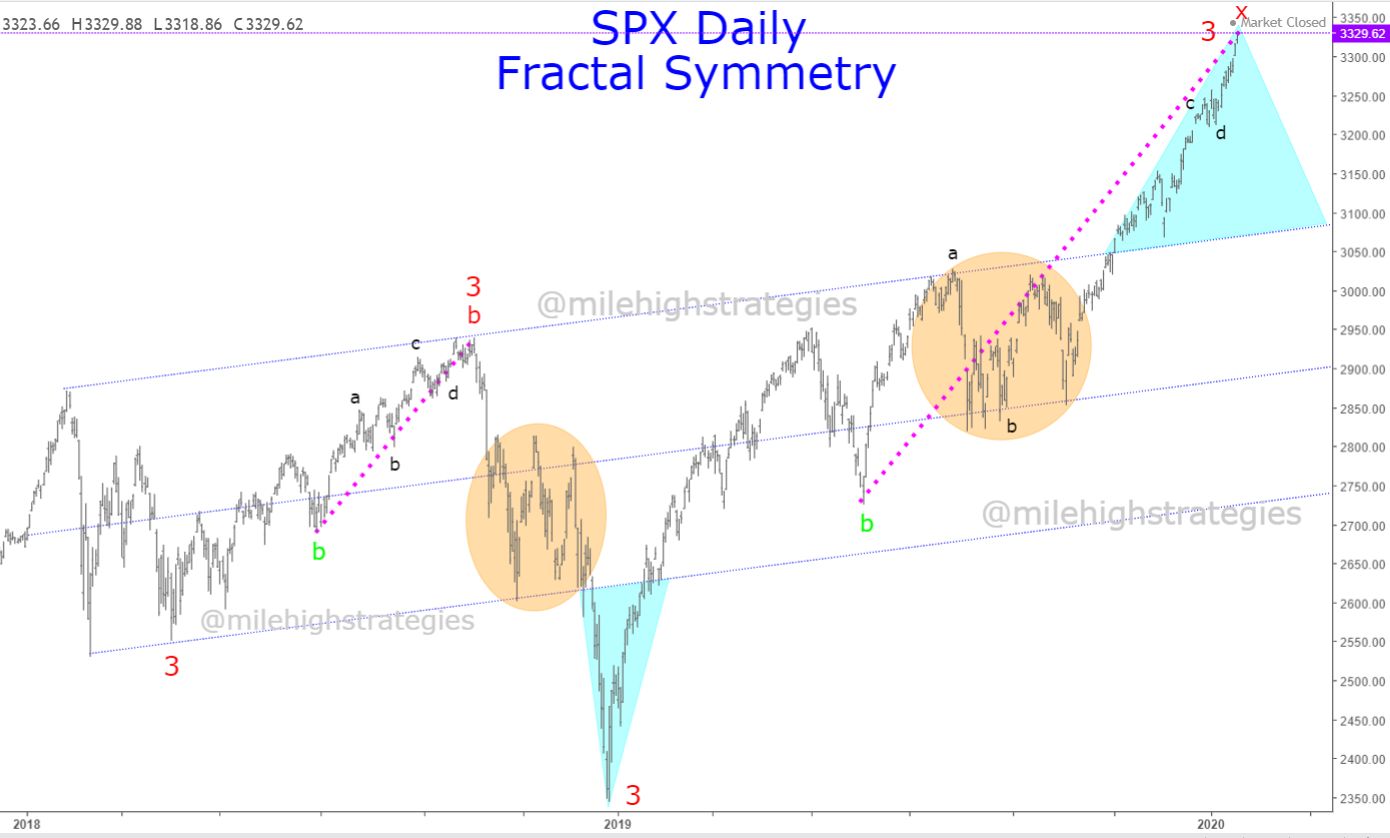 1. The “ping pong” between the middle and lower and middle and upper channel UTLs, prior to each of the respective breakouts….

2. The THROW UNDER and THROW OVER of the bottom and top channel UTLs, respectively, to within about 10-points of one another…

3. The two ending diagonal triangles to complete their respective wave-b:2 and wave-x2 fractals…

Nature seeks balance/symmetry in all dimensions, and for as long as I had to wait for my 2.15.19 forecast for the SPX to complete wave-x:2, it was a beautiful and balanced journey, though I often felt like a broken record in my insistence on wave-y:2 pushing upward to ~3290… 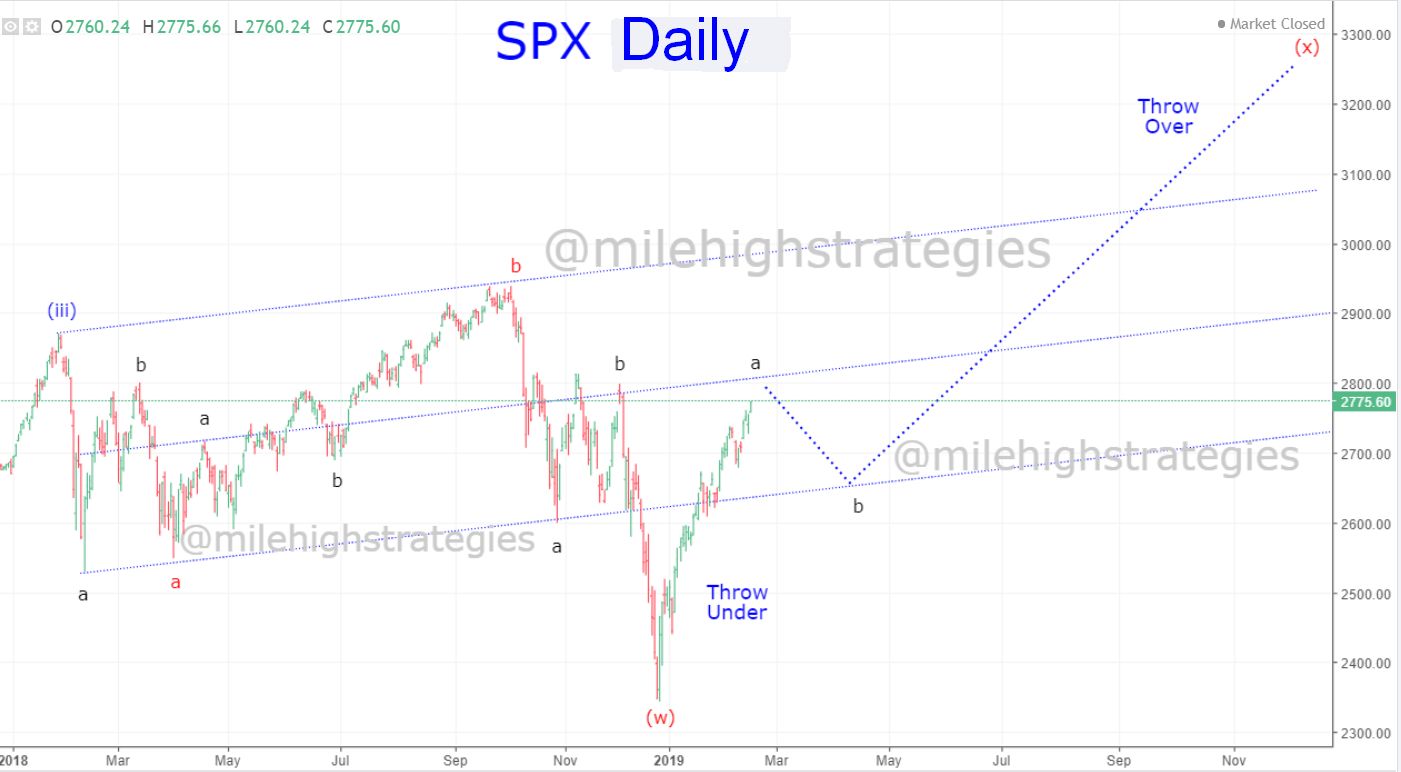 Wave-y:2 is next, so read on for clues on what next to look for next.

Continuing with the fractal symmetry from above would not be complete without addressing the price’s return to the upper channel UTL, as it did when it broke through the lower channel UTL and came back to it…

With greed moving markets upward slowly and fear moving markets downward quickly, and following that maxim, using the approximate time ratio it took for the round trip below the channel, it should take until about February 28 for the price to return back down to the top of the upper channel UTL… 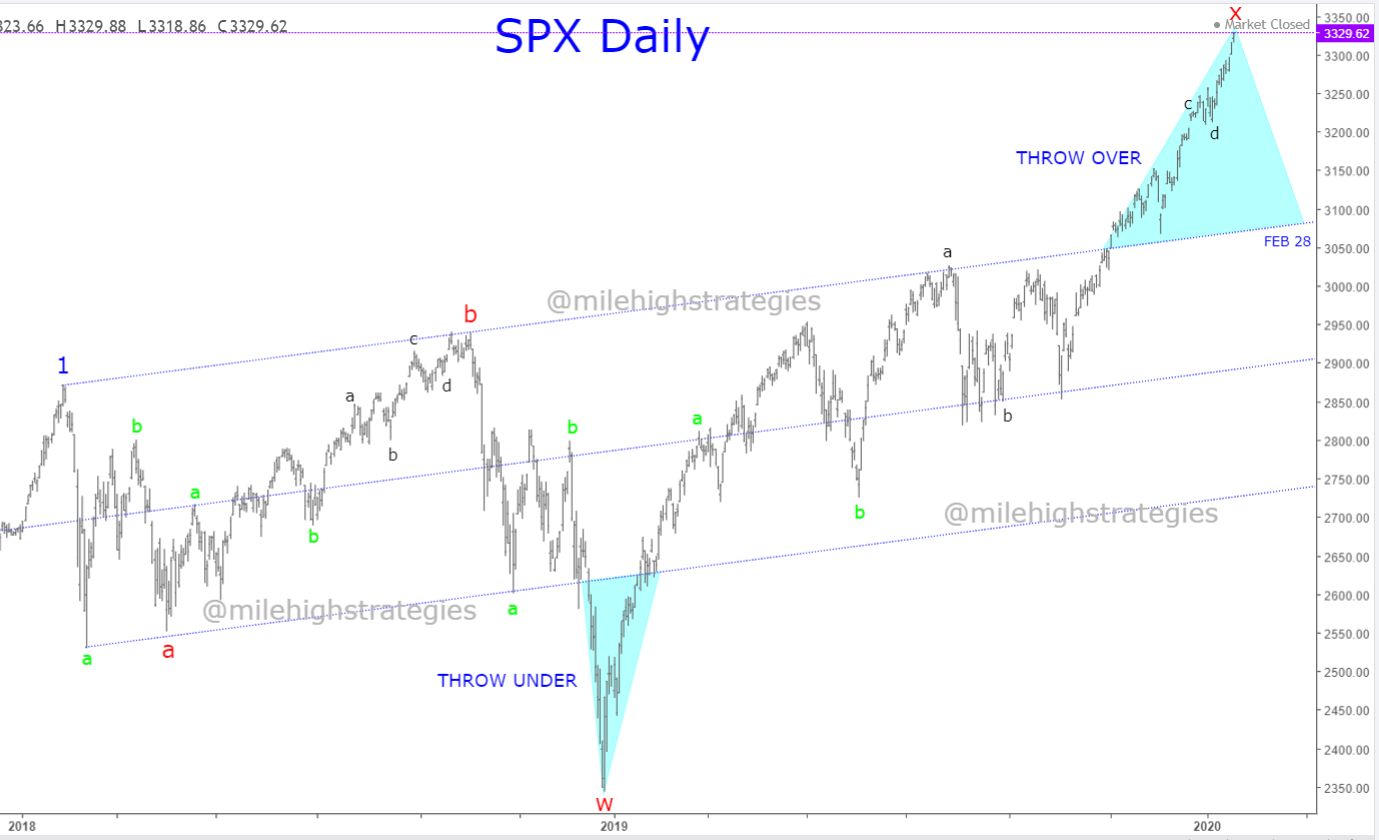 Next, in part three, I will present an alternate time-frame if the equities markets are under stress… don’t stop reading just yet!

What if, as I suspect will be the case, the US equities markets, yea, if all equities markets world-wide suddenly came under pressure, due to the eleven reasons I cite in the article I linked to above, and for yet a twelfth reason also, an imbalance of optimism for the markets to continue upward as evidenced by the imbalance in the put/call ratio? 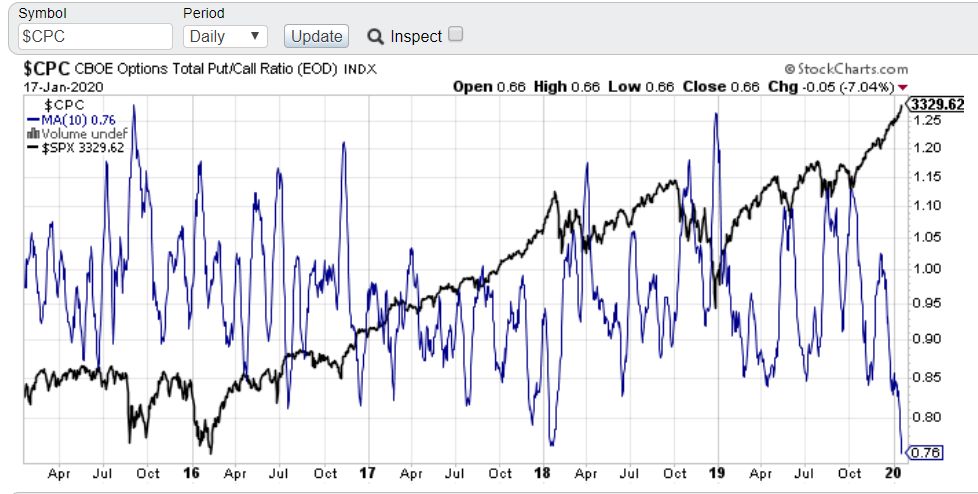 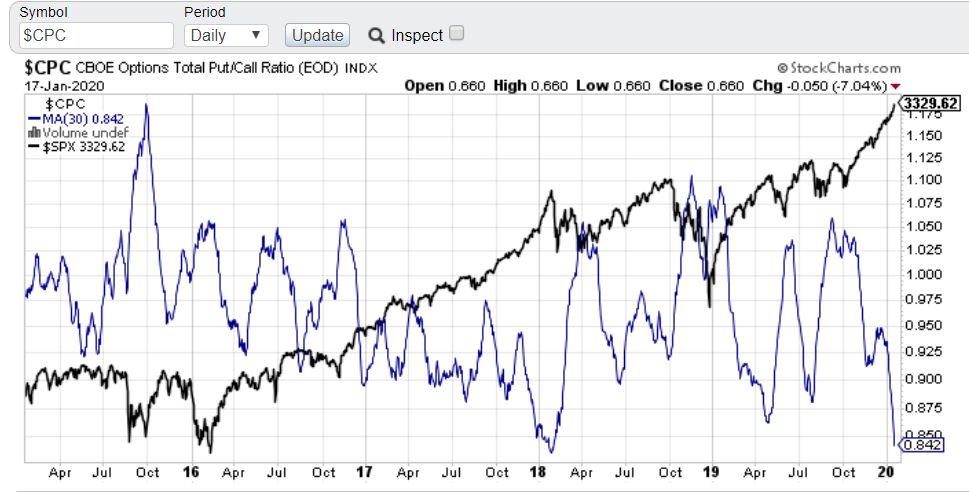 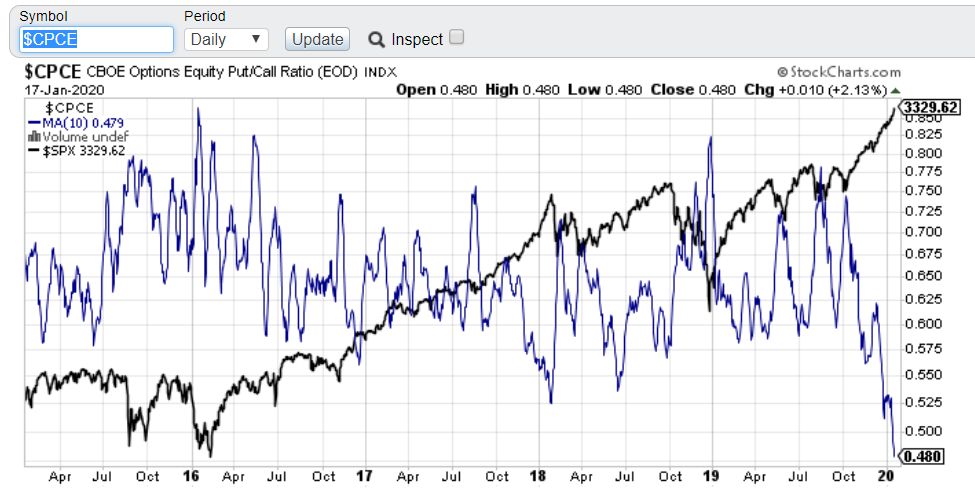 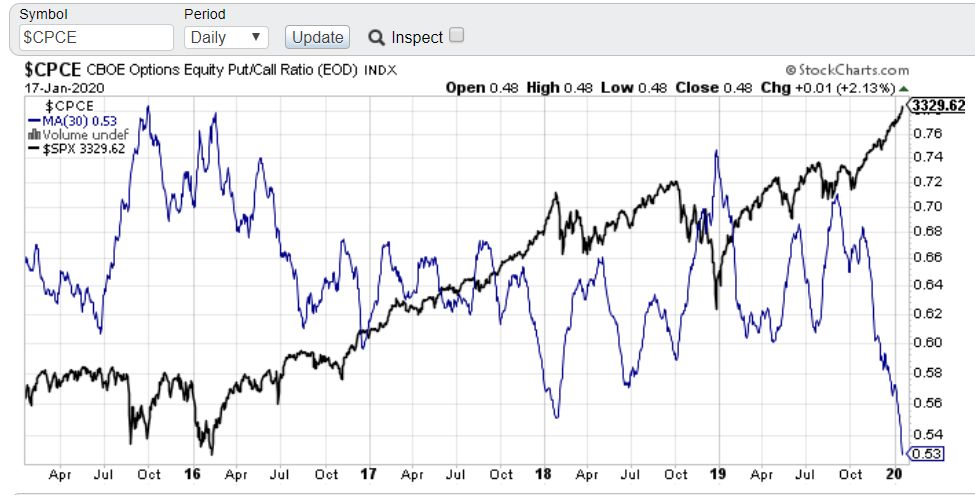 Did you notice that both the 10-dma and 30-dma averages on both sets of charts are at record-low readings?  Even lower in some cases than the price peak that was made in 2018!

So what if, in addition to the other eleven factors I mentioned in the article above, there is a vacuum of price support below the market, and a “panic” sets in… it will fall farther and faster than in the Part II scenario I mentioned above.

Below is the weekly SPX using the same angle of decline for wave-y:2, as in wave-a:2 – directly symmetrical – and if such a scenario were to take place, the SPX would be lower by about ~340-points in a matter of weeks, then would bounce, but rather than a .618 Fibonacci retrace as in wave-a, it only bounces a Fibonacci .5 retrace of ~170-points, and as matters are still not resolved by then, the next drop would be a Fibonacci 1.382 times the previous drop, for a ~470-point decline, to the original target (4.9.16) I had for the end of wave-2, at the 2700-2750 range into the late May, early June 2020 time-frame… watching. 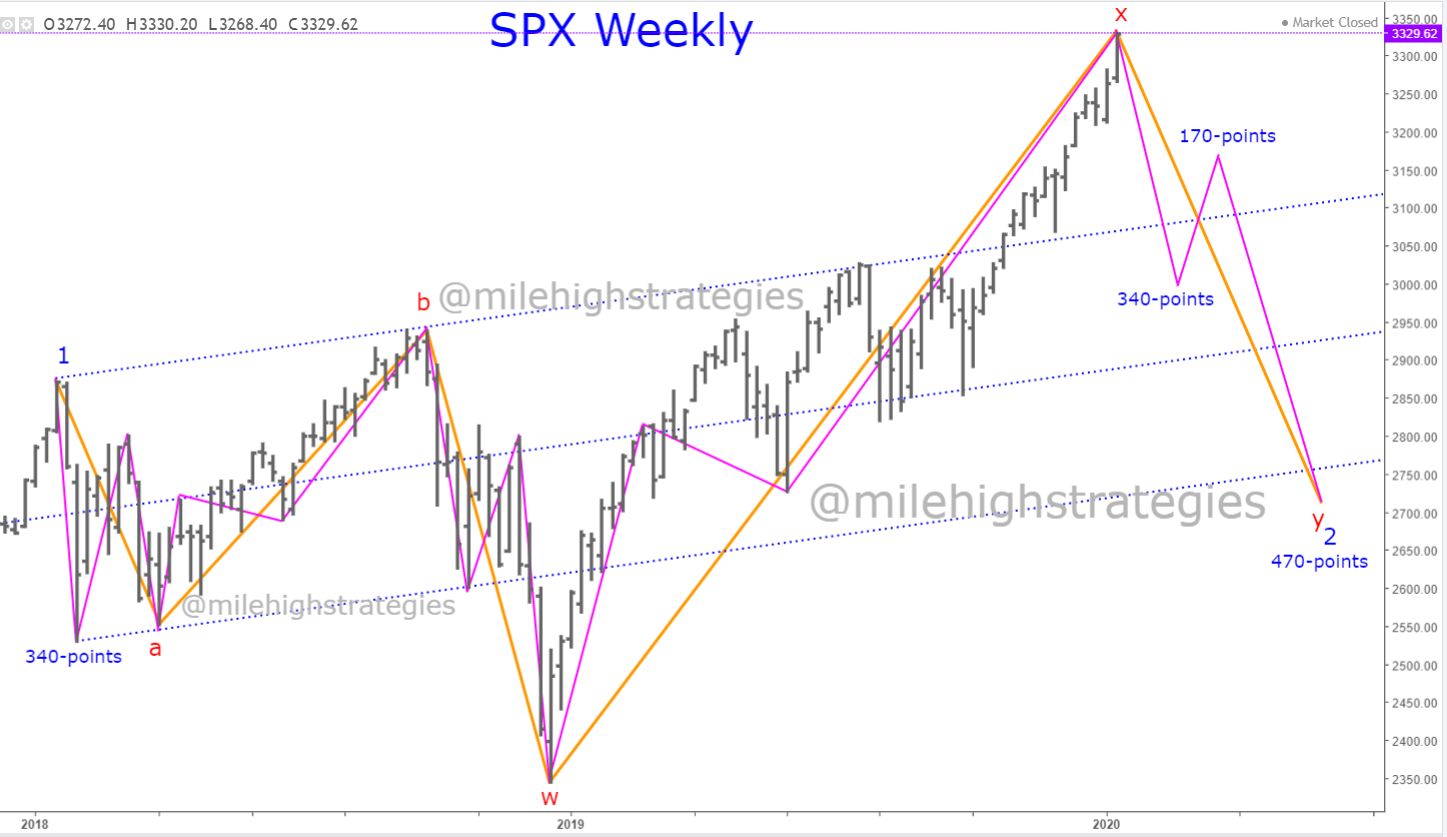 P.S. There’s also the possibility that an even “faster” leg down is possible if wave-y:2, decides to take symmetry with wave-w:2, and the length of the fractals are nearly identical… just another possibility I’m throwing out there.